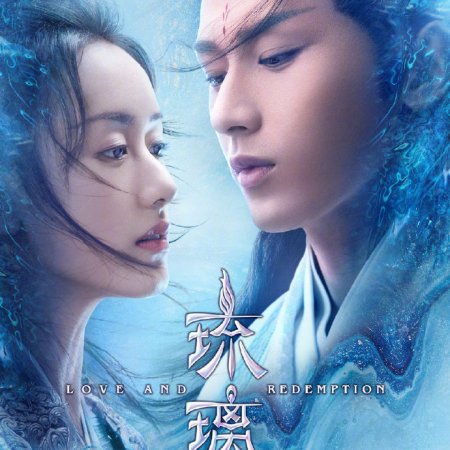 A lot of people are waiting for the next Xianxia hit, which may turn out to be the latest cdrama Love and Redemption, which airs August 6. It stars Crystal Yuan (Ever Night (2018)) and Cheng Yi (Noble Aspirations (2016)) and is about a masked man who must find true love to break a curse. This Youku drama should be English subbed.

Synopsis: According to legends, the god of war saved the heavens in a deadly battle against the demon a thousand years ago. Both fell from the heavens and disappeared from the world. Chu Xuan Ji was born to the world lacking in the six senses which makes her rather clueless and inept. She befriends Yu Xi Feng, the outstanding head disciple of Lize Palace who falls for her, thus beginning a xianxia romance that is entangled with the conspiracies from the past.

The Zan Hua Tournament is being held in the Shaoyang Sect and its leader Chu Lei has two daughters – his trusted eldest daughter Chu Ling Long, and the youngest daughter Chu Xuan Ji who is lazy and terrible at martial arts. When Yu Si Feng and Chu Xuan Ji meet through a coincidence, they forge a friendship with each other. Yu Si Feng falls for Xuan Ji despite the harsh consequences that he must face as it is forbidden for students of Lize Palace to fall in love.

Meanwhile, Ling Long clashes with Wu Tong after she criticized his foul actions at the tournament. In retaliation, Wu Tong accidentally injures Xuan Ji and gets expelled. Having recovered from her injuries, Xuan Ji promises to concentrate on cultivating. Four years later, Xuan Ji and Yu Si Feng meet again. Si Feng wears a mask due to a curse that can only be broken if he finds true love. (Source: ChineseDrama.info)

This drama was described as wuxia by some people, and I was unsure about that so I looked it up. Basically, wuxia dramas are about martial artists who can do awesome things through their prowess at martial arts, like scale walls and fly in the air. (Think tv drama Return of the Condor Heroes (2006) or movies like Crouching Tiger, Hidden Dragon (2000) Xianxia, on the other hand, has roots in wuxia, but it is more high fantasy, featuring immortals, ghosts, demons, etc. Xianxia means ‘Immortal heroes,’ while wuxia means ‘Martial heroes.’ I got this info from here, so be sure to check the site out if you want to learn more. There is a lot happening in the trailer, so it will be interesting to see if this cdrama can live up to its hype.