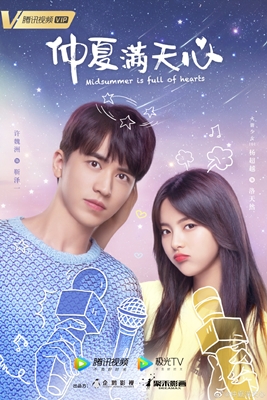 Korean drama Full House (2004) was my very first time watching a kdrama and since then, I’ve loved watching Asian dramas so I was pleased to see another remake of this popular drama, a Chinese drama called Midsummer is Full of Hearts (2020). The cdrama remake stars Yang Chao Yue (Legend of Yun Xi) as the female lead and Timmy Xu (My Girlfriend (2019)) as the superstar who lives in her house. This is a Tencent drama so it’s likely to be English subbed on their youtube channel when it starts airing July 30, 2020.

Synopsis: Luo Tian Ran is a fiercely independent and strong-minded young woman with a high sense of self-worth. Although she is tone-deaf, she dreams of making a splash in the music industry as a songwriter. However, due to some ill-fated interventions from a pair of her friends, she ends up having to move out of her house. Fate intervenes, and her path crosses with a pop superstar named Jin Ze Yi, who comes across as something of a spoiled brat. Despite his cold exterior, he is actually secretly childlike and needy.

The duo is forced to live in the same house on a temporary basis. At first, it seems they will never see eye-to-eye, as their personalities are so very different. However, over time, Luo Tian Ran gradually falls for Jin Ze Yi’s charms – and the feeling becomes mutual. Could love bloom between this decidedly odd couple? ~~ Based on the manhwa “Full House” written by Soo Yon Won.

There have been numerous remakes of Full House already, including a Filipino, Thailand remakes, a Taiwanese adaptation and even Full House Take 2 (2012) 😥, not to mention a Chinese version that hasn’t even come out yet. But most of those have been been based on the korean drama, rather than from the actual manhwa written by Soo Yon Won, which I’ve read a lot of and felt was better than the kdrama. So I’m hoping this version will have a stronger female lead character like the manhwa and I’ll be tuning in to check it out.