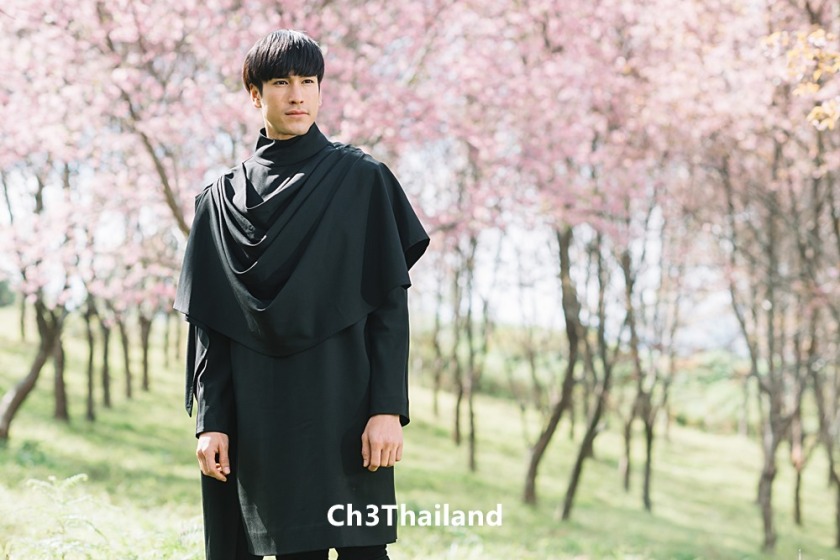 My first impression of the new remake of a kdrama, My Love From Another Star. It comes out every Monday and Tuesday, raws are on Channel 3 youtube channel and it’s being subbed by Muse now. I just watched the 1st episode. What did I think?

So we start off with a quick overview of when our hero comes to Earth with a rather laughable computer generated shots of a ship. Immediately, he saves a girl called Bua from falling over a cliff in her runaway carriage, with his freezing time skills and and then we see him in modern-day time, where he talks about how he’s been here for 333 years and how his skills and senses are superior to humans. In 3 months, he will finally have a chance to go back to his home, his star.  (I am totally getting Spock-like flashbacks from Nadech’s styling and demeanor. )

Then we have our heroine, Falada, a famous actress, who is also being heavily criticized as ignorant and stupid for her lack of knowledge of the Thai language. Our heroine is also moving into a new apartment today, right next door to our hero Professor Archira. Later on, she starts taking classes to combat the criticism she’s been receiving and guess who is her teacher? Professor Archira, that’s who.

We meet lots of the characters in the 1st episode, Falada’s mom, her friends, staff, rivals in acting, her boyfriend? Mork, and so on, while we also meet Archira’s one friend, an older man named Arun who knows he’s long lived. We also get flashbacks to the past, as Archira talks about wanting to see Bua again. She died 300 years ago, but 12 years ago, he saved someone from being ran over and she looked exactly like Bua. Meanwhile, our heroine Falada also wants to meet someone, whom she never forgot, who saved her life 12 years again. No surprise who that is, right?

Overall, I enjoyed the first episode. I think Matt is perfect for the role, but I have to see more of Nadech to see if he’s right for this. Not sure either of how much chemistry between the two, but I didn’t think the original stars had that much chemistry either. I don’t see any big changes here, this looks like it’s very similar to the original drama. While the computer generated parts aren’t impressive, the production seems to have placed a lot of effort elsewhere to get the look right. Some of the scene transitions seemed abrupt, but I liked it and want to see more.